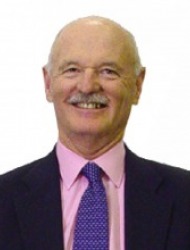 Murray Richtel, a former Judge of the Boulder, Colorado District Court, has taught Introduction to American Law at the Faculty of Law at Hebrew University since 1998.  During his nineteen years on the bench, Judge Richtel presided over a wide variety of civil and criminal litigation. He is a member of Judicial Arbiter Group in Denver where he mediates complex commercial disputes and professional malpractice cases when not teaching in Israel.

In 1971, Judge Richtel became a professor at the University of Colorado where he taught evidence, contracts, and trial practice as a tenured member of the law faculty. Following his appointment to the District Court bench, he continued to be involved in teaching a broad range of topics from historic trials to negotiations at both the law school and in continuing legal education programs. He also was involved in judicial education for new judges for 15 years. In Israel he has taught courses for Israeli Judges, both civil and military, and in the Israeli Ministry of Justice. For seven years he taught a seminar for Israeli students from Hebrew University and Palestinian students from Al-Quds University who studied together at a neutral site in Jerusalem.Judge Richtel holds dual American and Israeli citizenship.